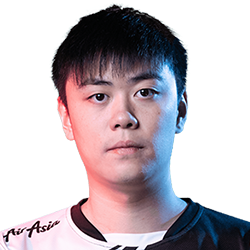 Kpii is an Australian offlaner for Newbee. Breaking into the scene with MVP.Phoenix, Kpii would often switch roles and positions based on what suited the team best, which is why he’s comfortable both as carry and offlaner. Despite being Newbee’s offlaner though, he’s the team’s designated Naga Siren player as it is one of his best heroes. Other signature heroes include Doom and Tidehunter.