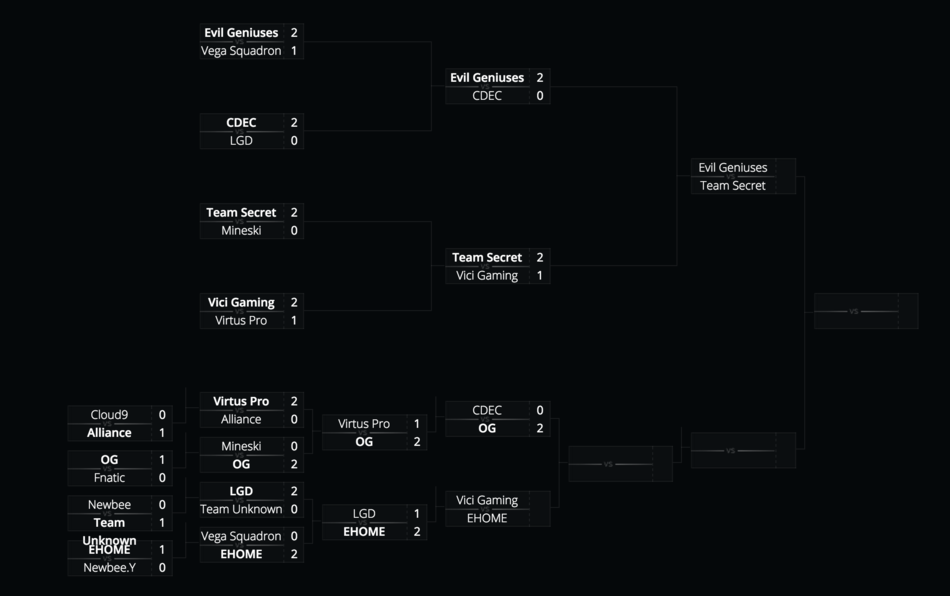 Five more teams were eliminated in these past two days: Virtus.Pro, Alliance, Mineski, LGD, and CDEC. Meanwhile, the two favorites of the tournament, Secret and EG, have fought through the upper bracket finals. Some matches were one sided affairs, namely Alliance and Mineski’s losses in the lower bracket, while other games showed us some of the highest level of competitive play we’ve seen this tournament.

After Day 4, the remaining teams of the Frankfurt Majors are: Secret, Evil Geniuses, OG, Vici Gaming, and EHOME.

There's the meta, and then there are things that Virtus.Pro does. Next time you pick Vengeful Spirit and mark the safe lane against the behest of your teammates, just point them towards this match. It was by no means a one-sided victory, but Virtus.Pro deserves kudos for having the confidence to draft and execute strategies that no one else does, particularly their Carry-Venge and Carry-Silencer lineups. They've been doing this even as the meta has changed, and they've gone back to it in an elimination match against OG.

Fans have a love-hate relationship with ROTK. At all times he's passionate, affable, and the perennial team player. At other times, he Dooms a catapult. In game 2, EHOME looked like they were going to seal the series off at 2-0, if it weren't for ROTK being a Fissure god on his Earthshaker. He showed an uncanny sense of timing, knowing how to skirt around a teamfight and when to jump in.

Pretty soon, either every team will need a Meepo player, or every team will need a surefire strategy to counter it. Part of the difficulty is not only picking a stable lineup against Meepo, but that it pushes a team off balance, off script, by doing so. Meepo is currently sitting at 100% win rate at the Frankfurt Major, also assisted by the fact that the two teams that play him have the most potent Meepo players in w33ha and N0tail.

In one of the most intense games of the playoffs, iceiceice swim taunts with his Tidehunter in its final stages. The outcome wasn't just yet secured, as Secret mounted a respectable push fighting against mega creeps, leading to one of many notable plays of the game, where EternalEnvy phases to VG's fountain and steals their cheese. Both teams had strong team fight heroes (a rare Tidehunter appearance) and late game cores that kept it competitive until the end.

Team Secret, after a devastating loss in Game 1, rebounded with this draft that looked less like a competitive lineup than one from 2k MMR low priority in SEA.

It was, in fact, a support Tiny played by Pieliedie, who took advantage of a mid lane pull that was hypothesized in r/dota2 months ago. The unexpected draft, in such a pivotal moment of the series, led to one of the more entertaining, albeit onesided, matches of the playoffs. In deciding games, teams usually retreat to comfort level heroes. With a pocket strategy like this, Team Secret would've been excoriated for losing, but instead they came out like mad geniuses. 1st? I think
Edit: that Secret vs VG though. Grand final worthy, or at least until Secret vs EG. "With a pocket strategy like this, Team Secret would've been excoriated for losing, but instead they came out like mad geniuses."
It seems like the writer first wrote evil geniuses and later realized his mistake in editing I hope VG can get into at least TOP3 Can anyone link me to "a support Tiny played by Pieliedie, who took advantage of a mid lane pull that was hypothesized in r/dota2 months ago" under Secret vs VG game 2. Currently the Enchanted Mango only has a 36.43% win rate. Together, we as a community, have the ability to fix this problem and end this horrific tragedy. Please help. It is our duty as gamers to give this item the respect it is due.