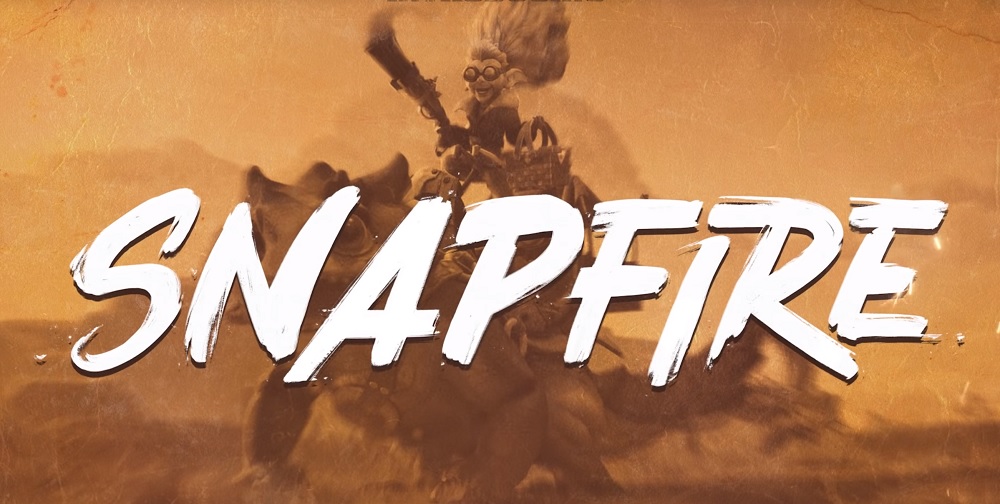 Last year Valve preemptively solved the problem of post-TI blues with the Grimstroke release. It was surprisingly effective since we got to analyze and theorycraft around the hero, keeping us busy and entertained. Unfortunately, it wasn’t the case this year, so we are mostly left with speculations and conjectures for the time being.

Speculating can also be fun, though. While there is very little to talk about when it comes to Void Spirit, we got a fully animated trailer for Snapfire and will try to guess what kind of hero she is.

The trailer starts with a bird being eaten by an alligator-looking trap and it looks like it could be one of the hero’s abilities. 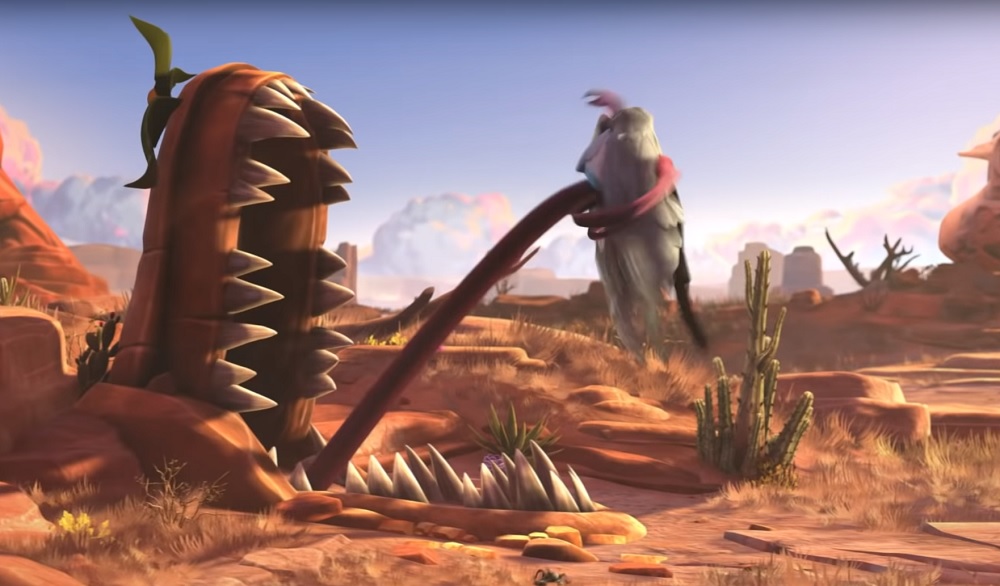 While there are several mine-like effects in the game already, all of them have different effects and different activation conditions, so this can fit in quite well, as long as it does something unique.

How to train your lizard

There are several interesting talking points when it comes to Snapfire’s mount.

We see Snapfire move both on her own and mounted. She runs to help Invoker in the flashback sequence and later chases Batrider riding her lizard. The lizard itself has also been shown acting independently from the hero. Maybe we will get something similar to Lone Druid’s bear, where you essentially get two units to control independently, but can combine them for some extra effects?

Extra effects might include lizard-mounted AA-guns. In the chase sequence we see Snapfire riding her lizard while shooting the fleeing Batrider. While shooting in itself is hardly a talking point, the fact the it is done on the move is interesting. Right now only Windranger has the ability to auto-attack while moving and Snapfire could borrow that mechanic, perhaps in a more restricted way, since she was only moving forward in the scene, while her “steering wheel” was used for controlling the gun.

Our best guess for now is that it is a vector-targeted movement command that allows the player to choose the attack target, while continuously moving forward. Given how at least half the shots in the scene missed the mark, it can also be a skill-shot of sorts, with the player controlling the direction of the gun. 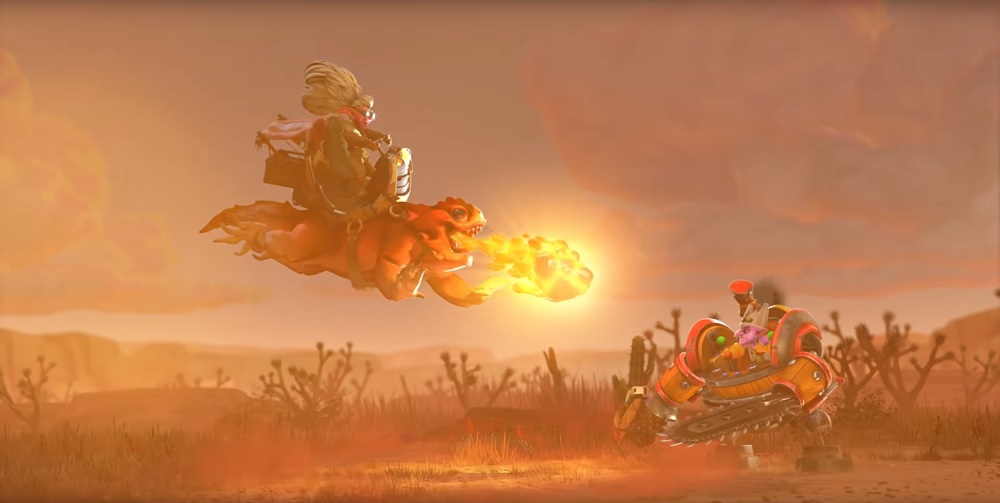 We also see the lizard breathe lava or something similar to it. It looked viscous and seemed to ignore and even jam Timbersaw’s Reactive Armor. Our best guess is that it is a single-target DoT effect that might apply Break or reduce the enemy Armor. We are hoping for the former, since only four heroes have it in their kit, with two of them requiring an Aghanim’s Upgrade.

Somehow in the world where Black Holes can be created at will and the Space-Time Continuum can be manipulated, Cookies are still incredibly exciting. In fact, they are probably the most intriguing part of the release trailer.

Our first idea when we saw the trailer was that cookies provide single-use talent upgrade. After all, we see Invoker use AoE Deafening Blast right after eating one:

However, that complicates things to a point where it doesn’t seem plausible. What if the hero you are using it on doesn’t actually have a talent that upgrades one of their spells? Can the Cookie give earlier access to a GPM talent to an ally then? How does it choose between left and right talent? Does it provide stats bonuses, if the next talent selection is something like +30 MS or +8 Armor? If so, then for how long?

These questions don’t seem to have a logical answer that can explain all of them at the same time, hence we don’t think this idea is correct. At the same time, AoE Deafening Blast simply can’t be ignored and we have a theory for why it was shown.

If we consider the whole scene being a flashback from Snapfire’s memory, we can potentially think of pre-7.00, pre-talent Dota. Before talents were introduced to the game, Invoker would get AoE Deafening Blast by maxing out Quas, Wex and Exort and it was only possible once he was almost at max level or if he had an Aghanim’s upgrade that bumped his orbs to level seven. 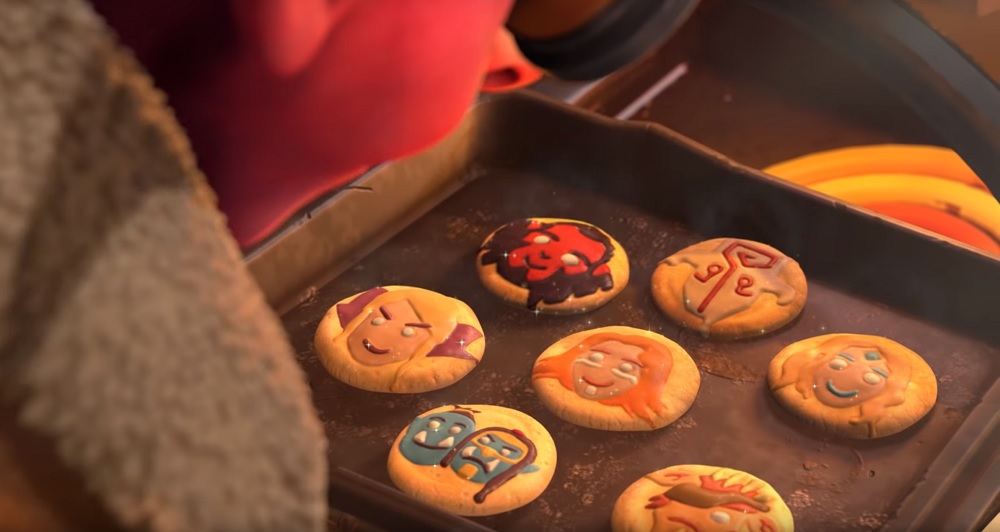 That makes us believe that Cookies provide Aghanim’s Blessing buff for a period of time. Given how this mechanic was removed from Io’s Tether talent, it doesn’t encroach on anything else already in the game, while the effect was already tested in the game before and looked relatively balanced.

Level of the ability could dictate how long the buff lasts and what the cooldown and the cast range on it are. We can also be completely wrong about it, with it being a lot simpler, providing cooldown reduction or spell amplification. It can also be a lot more complex, providing extra AoE to abilities. Let us know what your theories on Cookies are in the comment section below.

Imo, her Cookie is just a simple mana increase ability (maybe cooldown reduction, spell amplification and/or refreshing ability but thats about it)

You miss her shotgun. It can be a single target stun or even a passive stun ability (much like old sniper's Headshot)

Last but not least, i believe the Gattling gun is more suited with Gyrocopter's Rocket Barrage or even Skywrath's mystic flare. But vector targetting seems plausible as well. It's obvious the monster is gonna come out from the lanes like wrath of morokai. It's been awhile since we've had a sit-in-base-and-ult kinda hero since Zeus and AA. Also note that earlier in the trailer the lizard eats a melee creep, so it can potentially be a devour-esque mechanic where a certain amount of time after eating a creep/neutral the lizard's lava breath ability becomes available. I think they may have inspiration partly from HON's Nitro ( something like a duo unit where it could be that Snapfire is the shooter and maybe the beast can be detached from her if necessary like an ulti? ), but i havent really gotten to play that hero before. The aghs thing actually sounds possible cuz they gave aghs to everyone sorta recently. Could’ve been setting up for this hero maybe If the new heroes don't already have aghs we riot. Cookie may be a mini cheese. HP and mana insta restore. NOBODY CARES BECAUSE THE GAME IS RUINED BECAUSE OF ALCH. DO SOMETHING ICEFROG. IT'S LITERALLY UNPLAYABLE. ITS THE SAME THING EVERY GAME.

Dude above me is correct. Why has there not been a hot fix on Alch. Hero is broken. If I can win 100% of games with it, something is wrong. Basically if the game don’t end before 15 mins, Alch team wins. Also, faceless void for some reason seems pretty busted right now. Can’t really think why though. Maybe everyone just figured out time lock was nuts with enough attack speed. Like a stronger version of troll warlord basically with a way better ultimate.

55% is op to you??? Alchemist has a 55% win rate at the top tier in pubs... He isn't even on the top of the list. Though the heroes above are the "specialists" that are probably mostly played by people who know how to play them well. Lycan, Visage etc.

And Void has always been good... That bashing ability is god tier, you didn't know that? And Void is hard to kill in the early game as he can jump away and forget some of the damage he takes. But these dudes aren't that over powered... They are just the flavors of the day for now. When the new patch comes out in a week or so, these things will change. Alchemist will likely get some nerf, most likely his Greevil's Greed ability will be nerfed again... As that would delay his power spike so he isn't so far ahead in the early game.

These same exact comments could have been made about Wind Ranger before TI, and she is still as good as she was before... It's not like they nerfed her during TI. It's just that the pros didn't play her as much, but when they did, she performed quite well. That no cooldown wind run with invisibility is just too good. I'd say that talent needs to go, a few second delay on being immune to physical attacks is OP enough. You don't need to be non-targettable as well, so you can't get a spell cast on you... Imagine if you had Shadow Blade with a 6 second cooldown... And with lvl 25, it goes even lower than that. You basically have 6 seconds to kill/stun lock her now... And that is just too much, and it is not like Slark that you can follow her around to when it stops, she moves too fast for that.

But to be on topic, I think the cookie might give a "maxed out version" of a spell on a single usage, meaning all skill levels, aghs upgrades and talents. That would be good, but there will most likely be some limitations on this, it could be that these bonuses stack up with the skill levels. So lvl 1 cookie isn't as powerful as lvl 4 cookie. I don't think they'd go for a "more uses" route here as it could become quite unstable for the game, but a one time use isn't all that game breaking. And there is most likely a nice cooking period for this, it could also be that there is like a 60 second cooldown on the ability and you get several uses for it, like 5 cookies or something. With some type of a cooldown on how often can you benefit from them... So you could buff your team for a team fight with giving cookies all around, but you wouldn't be able to just feed them all to that six slotted AM to keep him going harder than he should... wait until they nerf alchemist wich are the four heroes that have break ?? viper is one and with aghanim`s upgrade doom and shadow demon

I miss nyx ulti thanks With a Level 20 Talent the buff gets +4 Seconds. I have my own theories on YouTube about the 2 new heroes. some similar ideas and some unique ones.

You can find my Snapfire video here - https://www.youtube.com/watch?v=oCrvNY0A2zw

You can find my Void Spirit video here - https://www.youtube.com/watch?v=_5ShjBrFyU8&t=9s Gyro begs to differ from Wind beeing the only hero who can move and shoot at the same time. i think the cookies only work with couple of hero, not all of the hero. if it can work with every hero why they draw their pic in the cookies, why not just a simple cookies without pic. Its might be a p4 p5 hero O_0;
The first spell might be trap which has been introduced at the startpoint of the video(Trailer)
2nd spell might be cookies _mana regen or hp regen buffing teammate may be also speed or spell refreshing to a definate percent(I think it has coldown reduction also ) to counter Antimage aghnim ultimate.
3rd spell might be knocking back! like sniper
the ulti may be changing form to dragon rider (gain more movement speed and attack speed )and also its has extra ability like dark willow and old kotl
jumping ability and shotting ability from dragon (armor reduction and fear!)