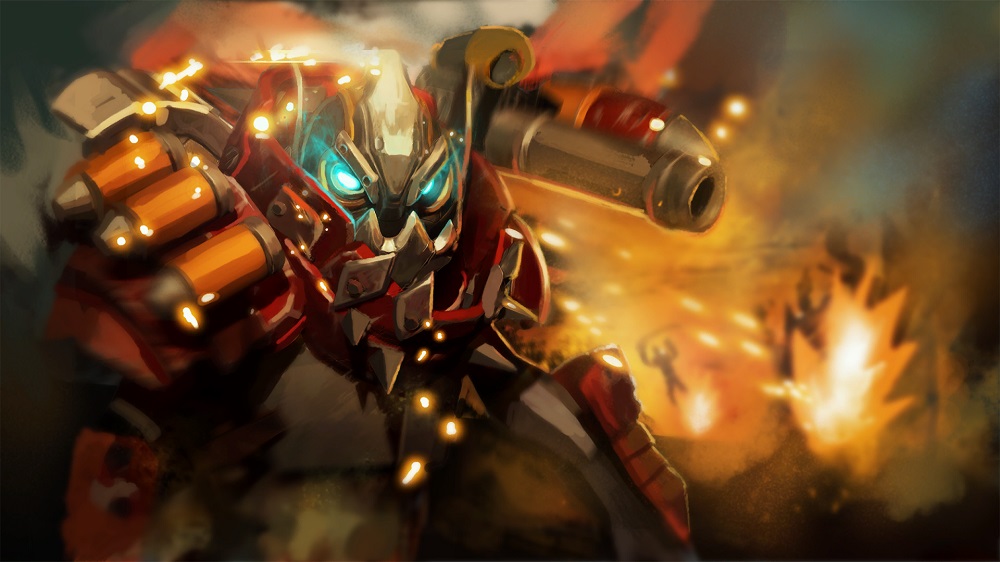 Clockwerk is one of the meta-defining heroes in the current patch, at least in the professional scene, but his pub popularity is still pretty low in most skill brackets. Today, we would like to highlight the hero and maybe convince players to try him out, before he most likely gets nerfed.

There is no secret ability build or a trick to make Clockwerk effective: the hero is incredibly straightforward, at least in how his skills are leveled up. Maxing out Battery Assault and then Rocket Flare, with a value point in Cogs at level two is what the absolute majority of players do, and it is almost undoubtedly the most efficient way to play the hero.

This build allows the hero to be a threat to most supports in the mid game, while also being a very good scout for his team and even an initiator, albeit with a rather low life expectancy.

While the hero’s item build does vary from game to game, it is generally about utility first and survivability second. Some of the most common purchases are Spirit Vessel, Heaven’s Halberd, and Pipe of Insight, depending on what your team needs. Going for Force Staff can also be an option and even items like Glimmer Cape and Solar Crest are not completely out of the question.

Most Clockwerk start the game with either Wind Lace or even Boots, allowing them to rapidly get on top of an opponent and make use of Battery Assault. Even at level one, provided the target is isolated, the ability deals a ton of damage and will most likely force the enemy to completely give up on harassing your lane core.

High innate regen, coupled with decent starting armor and pretty good Strength growth allow the hero to trade in such a manner continuously, and once he gets his Tranquil Boots, laning against Clockwerk becomes unbearable: he can always replenish his resources through Tranquils, he can threaten you regen with Rocket Flare and he can zone out most supports and cores in the early game, while providing a kill condition with Cogs.

If played aggressively, the hero creates a ton of space in lane and once First Blood is spilled, he can even allow himself some overexertion: it is frequently very beneficial for supports on low resources to die in lane, provided they kill or deal critical damage to an enemy. Clockwerk excels at these kamikaze attacks.

Lane dominance isn’t the only reason the hero is so popular right now: Clockwerk is also one of the few heroes who can be a very strong initiator with levels alone. Hookshot is frequently a one-way ticket for a position five Clockwerk, but, as discussed previously, the hero is surprisingly ok with dying, as long as he brings something to the table.

Constant scouting with maxed out Rocket Flare allows Clockwerk to find a good attack angle on the enemy, potentially isolating a support, Battery Assault deals an incredible amount of damage, while Cogs can be used as both an isolation tool and a way to split up the fight.

The latter is also one of the reasons the hero is so popular right now: it creates conditions under which enemy melee cores can’t deal damage to anyone but Clockwerk, even if they have a BKB.

Naturally, they can claw their way out and it is usually the best course of action for them, but it still gives Clockwerk’s team, essentially, a hard disable: the enemy is forced to do something non-threatening for a couple of seconds, on top of stun from the Hookshot.

As a position five with a very high-risk playstyle, it is unlikely Clockwerk will have a lot of items or levels, but reaching level 20 is not out of the question in longer games. At this point, on top of all the tactical advantages the hero provides with his BKB-piercing stun and zoning tools, he also becomes much stronger strategically.

Rocket Flare truesight is among the most broken talents in the game. Finding enemy wards and hard-countering Glimmer Cape is worth a lot, once both teams have reached the late game: if there is no apparent, overfarmed leader, whoever gets the jump on the enemy and starts the teamfight will most likely be victorious.

Levels aren't the only thing Clockwerk gets in the late-game: if the hero ever gets his hands on an Aghanim’s Scepter, playing against him can get very problematic. As is everything about the hero, his Agh’s is a high risk-high reward proposition, but it is absolutely worth it.

Double Cogs and double Hookshot is a lot of disable and a potential way for Clockwerk to escape after initiation. Battery Assault doesn’t get buffed in an impressive way, since multiple casts don’t stack, but at least it can ensure Clockwerk keeps on dealing damage even during the Overclock stun.

Clockwerk is a hero who is incredibly powerful at all stages of the game, regardless of his position. However, we wanted to highlight him as a position five first and foremost, since if the hero works without gold and experience priority, there is a good chance he is going to work even better with items and levels.

What are your thoughts on Clockwerk and do you think the hero is going to get nerfed in the next patch?

This writer @KawaiiSocks last played 2 months ago and explainin newMeta for everyone lmao.

is it like you dont ply with ur divine acc cause u dont want ur rank fall? My coach talked me into playing Clockwerk 5 few months ago (7.26b I think) because he was popular in China. I was amazed with the utility I provided thanks to the described skill build and proper itemization. So yeah, Rattletrap 5 works but I would not pick him over some current meta staple like CM/Ogre/Bane. STOP HES NOT OP DONT BRING THE NERF UPON HIM :((

Eh, I've climbed to EU top3000 earlier this season, so I don't feel like I need to prove myself anymore. And I am also constantly casting Dota, so that's where the majority of ideas are coming from. Writing for two Dota sites (DB and Trackdota) + Casting almost daily makes me want to play less (and I have less free time), though I am still very much enjoying the game, albeit in a slightly different way) @WARCRAFT can u climb to Divine first before judging others?

The article is for you to consider heroes and not forcibly pick them for games; dont get salty and blame the writer for writing. imagine being crusadog and bashing admin for posting about meta shameeeeeeeeeee

like he doesn't have to play, just read some patch notes + watch some games, and still have a better insight of the game than u kekw no, it's not just crusader talk. this guy's articles don't have much credibility. would be nice if dotabuff hired someone with a bit more experience tbh :)

@kawaiisocks well there was a Legend writer here (who wrote about zoo meta) and readin that was such waste of time. and that made me think you just have this acc for showin up ur rank (kinda make others trust you this way) and I guess my idea was wrong cause ur writings worth very more and I didn't wanna be rude about this with all respect
just keep the good job goin! I appreciate it cause I know how hard it is to write dota articles and satisfy immortal readers

@Therion well this was helpful for me but maybe not in your level. do you think anythin missing in topic?

^^ If divine games dont apply to crusader games then just say so. Dont beat around the bush. And if anyone else who likes to dispute this article pls give constructive criticism. Dont be like @Therion who does not like the above article and trashes it without giving any reason.

If you think you are better than Kawaii, then go ahead and apply to be a DB writer.

Guys, chill)
@Warcraft:
I might have been too blunt in my reply, sorry. Though I do believe any player at any level of play can meaningfully contribute. Dota is a very beautiful and deep game, but it is also unbelievably complex. Some player in Herald might actually know some hero or some matchup better than some Immortal player. E.g. I've played exactly 0 games on Arc Warden throughout almost 15 years of Dota and I never write about him. Nothing wrong with challenging my blogs, I actually welcome it.

Let's just be friendlier and more caring to each other? There is a reason our community is considered impenetrable by new players and our own attitude and elitism are to blame. Maybe if enough players in the community start being more welcoming, we are going to see those CCU numbers go up? Nothing would honestly make me happier. imagine being crusader 1 and write something wArcraftO) @KawaiiSocks was legit even back in the day i can confirm i played with him!
most players that play alot have less insight than players that cast and analyze this game since there is simply so much information.
clock as 5 is also legit btw (i have 3500ish games on clock now)! Best articles. I wonder what heroes next can be pos 5 more.

What does CCU mean?