The ten-player buyback in the match between T1 and PSG.LGD was one of the International highlights this year. Never, in the history of the biggest esports tournament, has so much gold been spent for no apparent gain, as even the end of the fight was inconclusive. This moment led to several interesting questions about the mechanics of buyback and today we would like to, perhaps not answer them outright, but rather think about and analyze them.

The history of buyback

Buyback as it is has been in the game for a very long time, probably based on the original Warcraft 3 hero resurrection mechanic. It didn’t take it’s modern shape until 6.70, where a Buyback timer was introduced. Prior to this change, most professional Dota 1 matches had hard carries having multiple buybacks at the ready come late game.

Buyback has changed multiple times since then. The timer went from four to eight minutes and an additional 25 second timer is now added to the next death.

On the way to its current, quite simple state, multiple experimental mechanics were also a part of buyback, such as gold earning debuffs or extra respawn timers, based off the remaining respawn timer at the time of buyback.

The cost for buyback was also calculated from in-game time and hero level, leading to a relatively constant increase in its cost as the game progressed.

All of the above was an attempt to keep buyback a viable choice, while also heavily disincentivizing it’s excessive usage. Buyback was meant to be an option not taken lightly.

Something very interesting happened around 2019, when Open AI Five became available to practice against for the general public and a series of show matches were played. One, very interesting result of it was an increase in popularity of offensive buybacks and a general shift from thinking about buybacks as a last-resort mechanic. 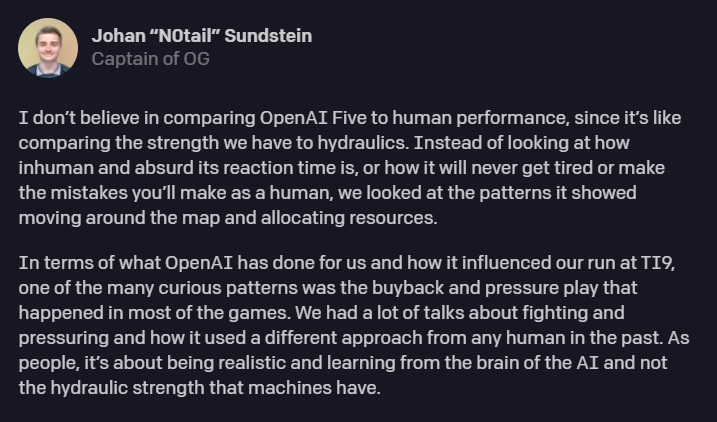 Since then and, we believe, right now the Buyback is seen by professional players as a mechanic that can lead to an advantage and it doesn’t matter whether you use it when defending or attacking. With no gold earned restrictions and a fairly forgiving extra timer, it became something better teams leverage to use as an extra tool, not get-out-of-jail-free card.

Right now, with a high flat price of 200 gold and a Net Worth-based extra component, Buybacks are pricey at the start of the game and then become more and more so for cores, while staying relatively affordable for supports.

This isn’t a new development and it was this way for the last three Internationals. What it means for the game in general and for supports specifically, though, is that knowing when and how to use buybacks in the earlier stages of the game became a must-have skill.

This is a skill that can’t be developed without practice and Dota as a game is way too diverse to create an easy answer to when buyback is or isn’t necessary. That said, we urge everyone to keep it in mind next time they die in-game and focus not on why it happened and who is to blame, but rather on whether they can have a tangible impact on the game right here, right now.

Now, let’s look back at this clip from the Lower Bracket game between Team Spirit and Virtus.Pro.

Take note that TORONTOTOKYO is playing without Buyback and is engaging into an enemy position one carry with Aegis. In fact, if you were a fan of Team Spirit or were rooting for them for other reasons, you would notice how often either TORONTOTOKYO or Yatoro, or even both didn’t have buyback available.

While it is probably a very minor factor in why Team Spirit looked so convincing in their run, we believe it is a factor. Perhaps an evolution or perhaps a curveball thrown at an enemy: Team Spirit cores were seemingly always ahead or at least on par with enemy heroes.

The reason is simple. If a team is at a Net Worth deficit, but the enemy heroes are holding their gold for buyback, come teamfight, there is going to be a theoretical power level parity or depending on the stage of the game, even an advantage for the losing team.

If a team is at a Net Worth advantage, fully buys out while the enemy team holds buybacks, this Net Worth advantage is theoretically multiplied. This is one of the reasons for why Team Spirit made multiple Rampages during their run: Yatoro was not simply ahead of the enemy by what the Net Worth difference implied. He was ahead by this plus whatever assets the enemy held for buyback.

So buybacks are bad?

Far from it and we probably need one of those “don’t try at home” announcements. As mentioned previously, we encourage players, support players especially, to learn to use buybacks when it gives their team a tangible advantage in a teamfight and also leads to a potential objective afterwards.

But we also encourage all core players to have a look at Team Spirit replays and make a mental note of when, why and how to save for buybacks. In our opinion, saving for buyback without having a key item for dealing with an enemy who needs dealing with (e.g. Skadi/Shiva vs. Morphling) is a pretty common mistake. Being underpowered twice is oftentimes much worse than risking it all and being at full capacity in the right place, at the right time. if you die at the beggining of the fight, the enemy is still commiting and there is a tower near, is always worth it to bb tp to the fight again. wow this is a really good article.

I personally feel like the buyback gold penalty should be reintroduced to dissuade people from buying back, currently for cores at key moments such as Rosh being up buyback is too strong I’d like buybacks to be deleted, to not stretch games longer than they should be

I’d like buybacks to be deleted, to not stretch games longer than they should be

oh pls dont, this is dota not lol i think it needs to be nerfed back in the days buyback comes with more consequences but nowadays people use it so easily. Think they are fine as it is . i still remember, when necro ulti disable bb, good times, they could bring that back. much more elaborate then what i thought about saving for buyback: will the next item you will make have more impact then a second life?